The ballet was originally choreographed by the Ballet Master Jean Dauberval to a pastiche of music based on fifty-five popular French airs. The ballet was premiered in 1789 at the Grand Théâtre de Bordeaux in Bordeaux, France.

The appealing simplicity and the naïve familiarity of the action of La Fille mal gardée have lent it a popularity that has established it in the repertory of many ballet companies all over the world. 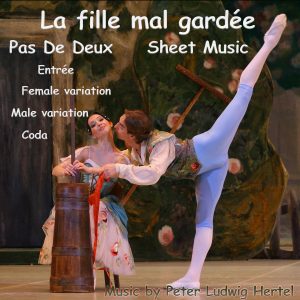 In the late 18th and early 19th centuries scores for ballets were often patchworks of popular airs derived from well-known dances, songs and operas. These scores were often arranged and adapted by either the theatre’s director of music or by the lead violinist of the opera house’s orchestra, who at the time also served as conductor.

The 1789 score for La Fille mal gardée was itself an arrangement of fifty-five popular French airs. The surviving orchestral parts of the 1789 score do not list a composer, and no extant contemporary account of the original production mentions a composer. It is possible that Dauberval himself arranged the score, for he certainly devised the ballet’s scenario and was a competent violinist. If it was not his work, then it may have been one of the musicians employed by the theatre.